Progress with developments at Apedale.

The Moseley Railway Trust has received a Heritage Lottery

Fund (HLF) grant of £10,000, it was announced today. This money will be used to develop the Trust’s interpretation of the role of the horse with both civilian industrial railways and in delivering supplies to the front lines during the First World War.

During the 1914-1918 conflict, both sides used horses not only for direct combat (cavalry regiments and the like) but also as a means of moving the huge weights of supplies which a fighting army needs to sustain itself. Light Railways were laid as a means of increasing the amount which a horse could haul, and also to spread the weight of wagons in the infamous mud of Flanders Fields and elsewhere. Frequently, supplies would be hauled by steam or petrol-powered locomotives to a point near the front lines, and then horses were often used for the last mile to the front – the so-called Trench Tramways. Using the Heritage Lottery Fund grant, the Moseley Railway Trust will replicate these operations and demonstrate them to visitors.

Thanks to National Lottery players, the Trust will now be able to fulfil two key objectives. Firstly, it will enhance the displays which will be available to the public at the forthcoming Tracks to the Trenches 2016 event at the Trust’s Apedale Valley Light Railway site. During this event, part of Staffordshire is transformed into the Western Front in 1916 – including a replica trench for visitors to experience. The event will include displays of working horses, mules and horse-drawn vehicles. This event takes place on May 13, 14 and 15 2016, and further details can be obtained from this website.

Secondly, the grant will allow permanent improvements to the facilities and exhibits at Apedale. These will be constructed by volunteers at the Apedale Valley Light Railway, and will include an extension to the existing demonstration railway and an interpretative panel. These will further enhance the Industrial Railway Trail which was initially funded by the Heritage Lottery Fund in 2014. A Trench Tramway wagon will also be constructed – these vehicles were hauled by horses on the very lightly-built railways which spanned the vital last yards to reach the troops fighting at the front.

Commenting on the award, Phil Robinson, Moseley Railway Trust Chairman said “We are once again delighted that the HLF have rewarded the efforts which our dedicated team of volunteers have made. Working with the HLF, this grant will not only transform the Tracks to the Trenches event in May 2016, but also allow permanent improvements to the visitor facilities at Apedale. We are very grateful to HLF for their continued support”.

Vanessa Harbar, Head of Heritage Lottery Fund West Midlands, said: “The impact of the First World War was far reaching, touching and shaping every corner of the UK and beyond. The Heritage Lottery Fund has already invested more than £70million in projects – large and small – that are marking this Centenary. Our small grants programme is enabling even more communities like those involved in The Power of the Horse to explore the continuing legacy of this conflict and help people in particular to broaden their understanding of how it has shaped our modern world.”

Why not spend the weekend at Tracks to the Trenches?!

This year the event organisers have been able to develop a plan to allow limited numbers of people to be part of the event for the weekend.

Instead of staying in a motel or Travelodge (hotel room only), why not spend a night or two in a First World War tent? This is not only an experience to be remembered, but should be cost effective too!

What more could you want! Just bring a sleeping bag & any food (although food/drink is available on-site separately)….

The offer is currently provided on a “per tent” basis – although if there is demand, we may be able to provide a “per-bed” communal tent too. These large (approx. 14’ ridge or bell) tents can easily accommodate 4 to 5 people on the camp beds.

For the weekend (yours on the Friday & Saturday nights) inclusive of all passes for those resident in the tent, the costs are:

Please contact us for more details & reserve you tent!

Time is certainly speeding up as we approach the start of the Tracks to the Trenches event!

The last weekend has again seen terriffic progress on-site and after much blood, sweat and tears (mostly the event organisers!) we are very pleased to announce that the Tracks now really do reach the trenches!!!!

Below are a couple of photos of the latest arrivals to site. More to come, watch this space….

Today (1st September) is the deadline for advance ordinary ticket sales – local schools are still able to group-book until 5th September (please contact us – we will do our best to help).

Tagged brigadelok, class b, joffre, tracks to the trenches

Progress on the ground!

It has been a little while since we made an update here – so we thought it was time to report some progress! Following a lot of behind the scenes work, some of the key landscaping work has recently started on-site. The a

im is to level off some field area (just under 1 acre), capable of being able to host a multitude of displays! We are grateful to Newcastle Borough Council, who have kindly provided us with a grant towards the reclamation of this former waste ground.

We look forward to hearing from you soon!

“Tracks to the Trenches” public forum is now active!

After weeks of our skilled technicians working around the clock, we are pleased to announce that the Tracks to the Trenches event now has its own public forum where you can follow venue development ideas and visitors, exhibitors & interested other parties can exchange ideas with each other and the event organisers. 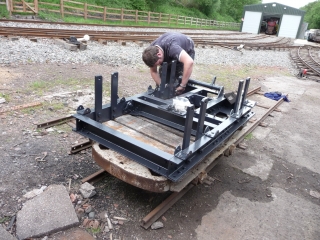 We are keen to be as interactive as possible with our visitors & in this way we are offering you the chance to be part of the event organisation! Please use the “Public Forum” button on the menu at the top of the page to join in the discussions.

As ever – we are still keen to make contact with current army regiments who may be interested in assisting us in some form and we are equally keen to be given ideas on funding some of the more exotic attractions! Please contact us via the comments or by the contact box on the right of the main index page.