The influx has started……

Amongst the many and varied tasks this weekend (mainly quite tiring), we have seen the influx of railway exhibits start – some visitors and some new residents.

The first of these was a new locomotive arriving on Friday (6th May). This is a Baldwin tractor, of the type very popular with French and American forces; the locos is currently standard gauge, having been regauged from 2’0″ gauge at some stage early in its (War Surplus) life. When built, this loco and the Ffestiniog’s Moelwyn would have been similar if not identical. A group of Trust members have imported this loco from a scrapyard in Switzerland. So, Tracks to the Trenches will offer a unique opportunity to see the UK’s only two Baldwin tractors together. The event will also be the only chance to see the Apedale Baldwin before restoration commences – which could be a long road ahead.

Arriving on Sunday was the recently completed British Class A open wagon, followed by the 10hp Baguley and 1916 20hp Simplex locos from our friends at the Welsh Highland Heritage Railway in Porthmadog.

Today saw the arrival of “Mary Ann”, “Moelwyn” and Busta – direct from their escapades in France. All 3 of these are courtesy of the Ffestiniog Railway

6 locos and 1 historic wagon in 4 days. More to come over the next few days……

Late exhibit entries are coming in now for Tracks to the Trenches. We are delighted to announce two real celebrity machines will be making a first-time visit to Apedale.

They are the Ffestiniog Railway’s 40HP Simplex (once known as Mary Ann) and Moelwyn – the UK’s only surviving example of one of the Baldwin tractors which were very popular with American and Canadian forces during WW1. Being FR locos, their wheel standards are alsightly incompatible with the railway a…t Apedale – so they MAY be static display or very limited operation – testing will decide.

There’s still just a few days to buy advance tickets. The deal is pretty good – you get to skip the queue, and get the guidebook thrown in. The guidebook is £4, and is really nice – so you get £13 worth of ticket and book for £9, and quick entry. A bargain if ever there was one. We’ve also still got a few Access All Areas passes left. Closing date for advance ticket sales is 1st May, so stop messing around and go to the Tickets page with your credit card in hand!!

Baldwin returns to Tracks to the Trenches two!

Moseley Railway Trust announces final line up of visiting engines for Tracks to the Trenches 2016 – The Baldwin Returns!

The Moseley Railway Trust is pleased to announce the details of the steam locomotives which will be visiting the Apedale Valley Light Railway for the Tracks to the Trenches 2016 event.

In addition to the previously-announced Kerr, Stuart “Joffre” from the West Lancashire Light Railway and Hudswell Clarke 1643 from Statfold, Baldwin 44656 of 1917 will make a very welcome return visit from its normal base at the Leighton Buzzard Light Railway.

Owned by the Greensand Railway Museum Trust, the Baldwin – No.778 – has just completed a major winter overhaul. These locomotives were supplied en-masse from their American builder to the British War Department from 1917 onwards, eventually totalling nearly 500 by 1918. They were the most common steam locomotive operated by the War Department Light Railways during World War One. After the War, No.778 was one of a batch of 50 locomotives identified for further service on the North West Frontier between India (now Pakistan) and Afghanistan. By the early 1970s, this war veteran had been re-discovered at an Indian sugar works by adventurous British railway enthusiasts. In March 1985, the loco returned to the UK. After a major restoration project, No. 778 was finally launched into public service in August 2007.

2014 saw No.778 star at the Tracks to the Trenches event at Apedale before withdrawal for a boiler overhaul. This has been completed in double-quick time – a testimony to the quality of the original restoration.
Phil Robinson, the Chairman of the Moseley Railway Trust, said “The Baldwin No.778 was a hit with our visitors at the 2014 Tracks to the Trenches event, and we very much look forward to a repeat performance in 2016!”
Additionally to the visiting steam locomotives, various visiting internal combustion locomotives will be at Apedale for the event, complementing the extensive collection of War Department Light Railway material which is resident on site. All of these will be operated in an authentic environment, moving supplies to a re-creation of a Western Front trench. Living History groups will be on site to add authenticity, as will the replica Tank which provided a backdrop to many memorable photographs in 2014.

Over the last couple of weeks since “Tracks to the Trenches 2014”, we have seen and been passed many links to photos and video footage of the event in full swing. We do not claim any responsibility or copyright for these – but would lke to thank everyone for making them available as a record of what was achieved in 2014!

Tracks to the trenches

Did it really happen?!

The BIG weekend has been and gone all too fast, leaving some of us somewhat shell-shocked.

There has been much positive feedback – it seems as though we got something right. Overtime we hope to provide a gallery of images and a comprehensive list of links to show what “Tracks to the Trenches: 1914 – 2014” presented. In the interim – please see the photo below as some evidence that it really did happen!

Hudswell collecting a light railway supply train at Apedale Road, with Baldwin 778 on the rear.

A BIG thank you to all visitors, volunteers, exhibitors, traders, equipment owners and supporters for helping us stage a truly memorable event. We hope that everyone will take a few moments to consider the work of the light railway and tramway companies during WW1, especially on Remembrance day in November. 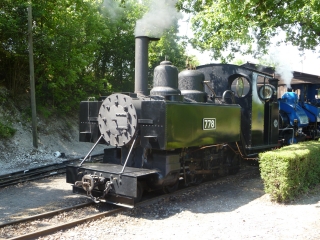 The Moseley Railway Trust is pleased to be able to confirm the booking of the first visiting steam locomotive to the “Tracks to the Trenches – 2014” event; Baldwin 4-6-0T No 778 from the Leighton Buzzard Railway in Bedfordshire. No 778 has not made many visits to other lines since restoration was completed in 2007, so this event will provide some unique locomotive/rolling stock combinations and photographic opportunities. 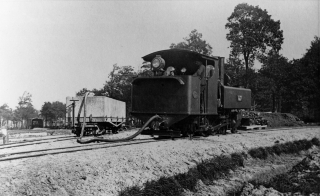 1917 onwards in all theatres, eventually totalling nearly 500 by 1918. They were the most common steam locomotive operated by the War Department Light Railways during the Great War. Based on a very similar design previously supplied to the French Army in Morocco, they had a limited life expectancy on the Battlefield of a mere 6-8 months.

Gareth Roberts, one of the event organisers of the “Tracks to the Trenches” event commented; “Today, only a very small number of these machines have survived and an even smaller number are operational. We are extremely grateful to the Greensand Railway Museum Trust and the Leighton Buzzard Railway for making available this locomotive, fully restored to original appearance, for this important WW1 Centenary commemoration.”