The Moseley Railway Trust is delighted to announce that agreement has been reached for a second visiting steam locomotive for the September 2014 Tracks to the Trenches event. The North Gloucestershire Railway, based at Toddington, have agreed that their 1918-built Henschel Brigadelok locomotive will visit the MRT’s Apedale Valley Light Railway for the Tracks to the Trenches gala, to be held on September 12, 13 and 14 of 2014. 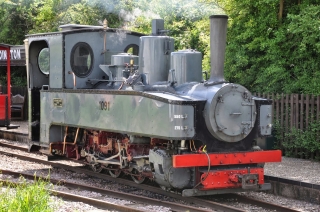 Almost 2500 of the Brigadelok locomotives were built. These served the German military light railways – known as Heeresfeldbahn – on all the fronts of the war. Despite being built for military service, they subsequently demonstrated their usefulness for many post-war operators. An innovative feature is the Klein-Lindner radial axles, which allow the locomotives to traverse tight radius curves despite the 080 wheel arrangement.

The locomotive which will come to Apedale is Henschel 15968. After the end of the First World War, the locomotive worked at the Naklo sugar factory in Poland, hauling trains of sugar beet in from the fields to the factory for processing. In 1985, the loco moved from Poland to the UK, where it was restored to its current immaculate condition, carrying Heeresfeldbahn grey livery and the number 1091.

Phil Robinson, MRT Chairman said – We are extremely grateful to the North Gloucestershire Railway for loaning us this locomotive. When taken with the Baldwin loco which will visit from Leighton Buzzard, and the Moseley Railway Trust’s own Joffre and Hudswell Clarke steam locomotives, we now have engines representing all the main combatants in the First World War. Our event is all about commemorating all those who participated in this conflict, regardless of nationality, and we believe that representing the German forces is key to this.

The Kerr Stuart locomotive Stanhope, normally resident at Apedale, will be making a reciprocal visit to the North Gloucestershire Railway during 2014.